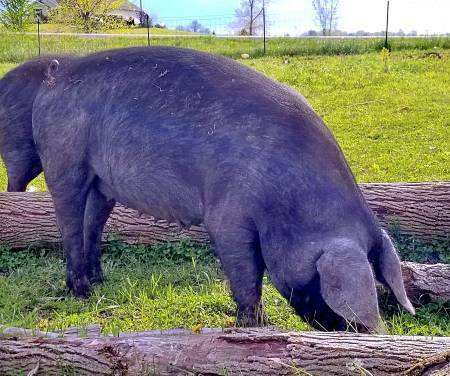 The Large Black breed has only been officially recognized since the incorporation of the Breed Society in 1899, but there is ample evidence that the large black pig, with its characteristic whole color, length, fine hair, lop ear, and great grazing capacity, has existed for many generations. It was originally found chiefly in the western counties of Devon and Cornwall and the eastern counties of Suffolk and Essex of the UK. The Old English hog would have been the basis for many of England’s native swine.  It is documented that the pigs from the eastern counties were influenced by the importations from China in the late 18th century while those of Devon and Cornwall were more closely related to the pigs in mainland Europe where the Neapolitan of Italy contributed to the pure blackness of the coat. The Chinese and Neapolitan pigs also heavily influenced the Berkshire which prior to these introductions had a coat resembling that of the Sandy and Black.

The Devon pigs used were originally selected for the length of their bodies, ears, noses, tails, and hair without reference to quality or substance. The longer the better. By 1850 the breed was small-boned and thick bodied, with good conformation and constitution, this is due to selective breeding. The Large Black grew in popularity until the Breed Society was formed in Ipswich (1899). The first Herd Book of the Large Black Pig was published in then where the consistent Devon and Cornwall was combined with those of the smaller Black Essex, Black Suffolk, or Small Black and other black East Anglian breeds whose number had fallen below sustainable level. There were many variations between the pigs of the two areas, but with the advent of the rail system and trading of breeding stock by 1913 a “general uniformity” had been achieved.  A trademark was registered in 1902 being the letters LBP within a shield.

The first exports to Australia were in 1902 or 1903, with the Large Black being chosen over the Berkshire pig because of their ability to thrive in hot weather, their foraging abilities, and their fecundity. The exact date of the first arrival of the Large Black in the United States is not well documented but is believed to be about 1913 and could be as late as 1920 (depending on source). By the 1920s the Large Black popularity had peaked with the entrance of 121 Large Blacks into the 1919 Royal Show, more than any other breed. A sow was Supreme Champion at Smithfield in 1919. After World War II, the population began declining as farmers began to produce pigs that would do well in confined indoor farming. The Large Black Pig Society in England was merged with the National Pig Breeders Association (now named the British Pig Association) in 1949.

In 1955 the Howitt report on the development of pig production in the United Kingdom was published. Its main conclusions were that UK pig farms were poorly placed to compete with European producers, that the diversity of local breeds in the UK was an obstacle to progress and that British pig farmers would focus on three breeds only: the Welsh, British Landrace and the Large White. The report began a period of decline in all other British pig breeds, including the Large Black. By 1973, the Rare Breeds Survival Trust was founded, numbers of all traditional pig breeds were dangerously low, and many of them were extinct. The Large Black was placed on the Trust’s endangered list. In the United States, supermarkets affected how swine was raised. Animals that had previously been raised outside foraging were now being confined and intensively farmed in favor of leaner, lighter colored meat. By the time the American Minor Breeds Conservancy (Now The Livestock Conservancy), the marbled pork of the Large Black pig had become critically endangered. By the summer of 1977, there were 58 dues-paying members. Today The Livestock Conservancy is the largest nonprofit membership organization in the United States working to conserve rare breeds and genetic diversity in livestock and poultry.

We had begun a search for rare and old books on animal husbandry, Large Black Pigs, swine processing and breeding more than a decade ago. We are gleaning the information about our beloved Large Black’s heritage. One quote was the origins of the Large Black Pig has been lost to oblivion. We want to inform our members with what knowledge there is. We will update the history of the Large Black as we discover information that has been lost. Our endeavor here is to inform and educate about this amazing breed. You will see quotes from other Breeders and Authors about these pigs.